Available in several formats from:
​  Amazon​

Audible
Barnes & Nobel
Signed copy direct from me
...and at many fine bookstores 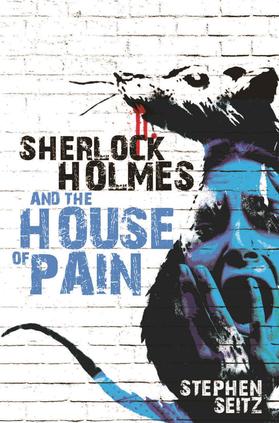 The best parts of this book were the extended flashbacks of Holmes' early dealings with Dr. Moreau, before either character fully grew into themselves as we know them from their original literary incarnations. How these two forever altered each other's destinies - setting one on the path to become the great detective we know and love and the sadistic mad scientist we love to hate - rings true. It's also here where Seitz surprises with his previously unguessed horror-writing chops. There are some truly chilling, white-knuckle sequences as Holmes discovers the not-so-good doctor's ghastly secrets...and because this is far younger, unformed Holmes, quickly gets in over his head. Seitz lets the reader identify with his Holmes, in a way not typically seen, without cheapening or softening the character's mystique. It's not often one sincerely *fears for* Sherlock Holmes, feels like he's in real physical danger of being injured or killed like anyone else. By the time Holmes narrates the truth of the Giant Rat of Sumatra, Seitz even shows a bit of flare for high-seas and jungle-shrouded swashbuckling action-adventure.

The G.E. Challenger subplot took longer to win me over. The two story-lines barely intersect for most novel, and only incidentally seem to affect each other. For the first half, I felt like I was cutting back and forth between two different loosely connected books, and because Holmes' story felt more pressing and fully realized, the latter felt like a distraction. The Challenger subplot does come into its own, though, late in the game, where it takes over most of the final act, and lets Seitz's writing shine in yet more unexpected ways, which I won't spoil. His Challenger is true to what I remember of the character from Doyle's LOST WORLD, simultaneously an arrogant, amusing blowhard, a sympathetic underdog with some admirable, dashing qualities, yet ultimately tragically tunnel-visioned.

There was one key aspect of the ending that felt rushed and overly abrupt, and one a detail of the epilogue that seems to clash with my recollection of the ending of IoDM (perhaps it's time I re-read that book?).

Sherlock Holmes and the House of Pain

A missionary woman has disappeared in Spitalfields, one of London's most dangerous districts. When Sherlock Holmes in called on to find her, he discovers enormous, highly intelligent rats have made their home under the streets of London. Holmes is forced to confront the horrors of his past and science gone mad. Word of this phenomenon draws the attention of rising zoologist G.E. Challenger, who decides he must meet the creatures' creator, one Dr. Moreau. As in the author's 'Never Meant to Be', the worlds of Sherlock Holmes and H.G. Wells once again come together, this time to uncover the truth behind the Giant Rat of Sumatra.