Available in several formats from:
​  Amazon

Audible
Barnes & Nobel
Signed copy direct from me
...and at many fine bookstores

"It is more than mere pastiche; it is the first of (hopefully) a long series of new novels that provide more of Holmes and Watson for longtime Sherlock fans and today's new readers." -- Patty Inglish, Curled Up with a Good Book, March 2007"Sherlock Holmes and the Plague of Dracula is a treat for those enamored of the occupant of 221b Baker Street. Possibly if the journals reveal more cases, readers will have more such treats in store." -- Mary Ann Smyth, BookLoons Mystery Bookshelves
​

Sherlock Holmes and The Plague of Dracula

Stephen Seitz' first novel took more than 20 years to write, but critics and readers agree the result was worth the wait.

When Jonathan Harker disappears after last having been seen visiting Count Dracula in Transylvania, girlfriend Mina Murray entreats Holmes and Watson to find him. As Holmes investigates, he learns of many things: Prof. Moriarty and Count Dracula's plan to interfere with the British financial system; Mary Watson's sinister secret; the secrets of vampirism; and dark secrets of life and death. Not to mention the secret of the Great Hiatus finally revealed.

Had Sir Arthur Conan Doyle written "Dracula," he might well have written this. 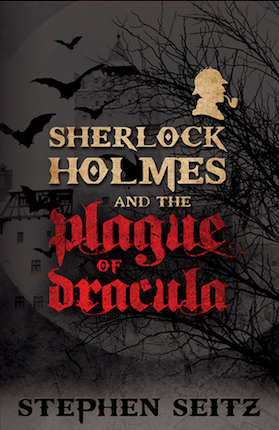