If you are looking for a fast paced thriller with an intricate plot and a descriptive New England setting, then "Terror Strikes Downtown" is a book for you. The novel involves reporter and amateur detective Ace Herron using his reasoning skills to determine who really is responsible for a supposed terrorist attack on a small Vermont town ... Seitz casts a wide net that grabs about a dozen players in the story. Strands seem to wander off but all ties together by the end in ways that will not be obvious to the reader. An excellent book with a satisfying mystery and conclusion, "Terror Strikes Downtown is sure to please fans of modern day thrillers by authors such as Archer and Grisham." HPDoyle, Amazon

A typical spring day in the town of Valentine, Vermont: golden sunshine and green hills on the outside, while embezzlement and extortion lie underneath, where desperation rules the lives of many. Deadly explosions suddenly rock the town, spreading fear and terror, leading to panic and violence, leaving dozens of dead bodies and wounded souls in their wake. Rumors of terrorism fly through town, and the lives of many are changed forever. It is up to crime reporter Ace Herron to sort the truth from the fantasy, to bring sanity to speculation, not to mention beating national media. The case could make his career, but standing in the way is Enoch Teed, a hostile editor who wants a certain kind of newsroom: one without Ace Herron in it. From Stephen Seitz, the internationally acclaimed author of "Sherlock Holmes and the Plague of Dracula," comes "Terror Strikes Downtown," the second in the Ace Herron mystery series. 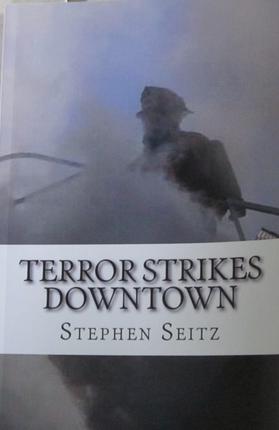 Available in several formats from:
​  Amazon​
Barnes & Nobel
Signed copy direct from me
...and at many fine bookstores